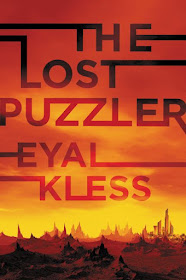 Eyal Kless is a classical violinist who enjoys an international career both as a performer and a teacher. Born in Israel, he has travelled the world extensively, living several years in Dublin, London, Manchester, and Vienna, before returning to Tel Aviv. Kless's first novel, Rocca's Violin, was published in Hebrew in 2008 by Korim Publishers. He currently teaches violin in the Buchmann-Mehta School of Music at Tel Aviv University, and performs with the Israel Haydn String Quartet, which he founded.

Here Kless dreamcasts an adaptation of the first of his sci fi/fantasy novel series, The Lost Puzzler:

I am pretty happy about this because frankly, I saw this book playing in front of my eyes so many times, I had to keep reminding myself that it hadn’t happened (yet!)

There are four main characters in The Lost Puzzler (and several more minor characters with very memorable roles,) but I will concentrate on the ones that I feel closest to.

Vincha is by far the strongest female character and the main driving force behind the storyline. We meet her when she is in her 40s. A tough ex-mercenary called a Salvationist, who used to raid a mysterious alien city in search for technology and loot. She is not a dainty woman, I do imagine her being able to floor a man with a well-aimed punch, and she can take a lot of damage too. Vincha is also an ex-addict, and she lies, cheats, steals and fights with no hesitation. A few tough female actresses come to mind. My first thought would be the young Sigourney Weaver, but I bet even Sigourney would think twice before facing ex-Xena princess warrior Lucy Lawless (now that’s a great name). Game of Thrones’ Gwendoline Christie is another warrior I would rather not face under any circumstances. Hilary Swank, star of Million Dollar Baby could stand her ground against anyone.

If the role of Vincha had me torn between several actresses, only one name springs to mind when I think about Galinak. Like Vincha, is a retired Salvationist who works as a tour-guide/bodyguard in the city’s most notorious district, The Pit. Galinak’s age has not diminished his sense of adventure or juvenile attitude. While Vincha fights as a survivalist, Galinak sees it as an art form, and his carefree, no bullshit attitude leaves me with only one name in mind to play him: the great Woody Harrelson.

As a stark contrast to both mercenaries stands the novel’s narrator, known only as Twinkle Eyes. He is no muscly, chiseled super-hero, on the contrary. He is just a lowly secondary scribe in the Guild of Historians thrust on a mission beyond his expertise. But Twinkle Eyes is a fast learner and a quick thinker and his learning curve may be steep, painful, or even downright wrong, but he rises to the occasion every time. So when I think of the ordinary hero of The Lost Puzzler, Twinkle Eyes, the actor I think would be right for the role would be either Forest Whitaker or Martin Freeman.

The Page 69 Test: The Lost Puzzler.