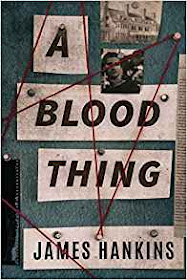 James Hankins writes thrillers, mysteries, and novels of suspense, including The Inside Dark, The Prettiest One, Shady Cross, Brothers and Bones, Drawn, and Jack of Spades. He lives north of Boston with his wife and sons.

Here Hankins dreamcasts an adaptation of his new suspense novel, A Blood Thing:

A Blood Thing is a crime thriller about a powerful family targeted by a twisted, cunning blackmailer. The importance of family and the lengths to which we go to protect our loved ones is the central theme of the book, so if it were made into a movie, the casting of the actors who would play the family members would be critical to bringing that theme to life on the screen.

The story begins with the murder of a young woman, followed by a strange encounter. Andrew Kane, the youngest governor in Vermont’s history, is at yet another public meet-and-greet when a stranger slips him a cellphone and, before disappearing in the crowd, mysteriously instructs Andrew to hold onto the phone because he’ll need it “after the arrest.” Shortly thereafter, the obvious question is answered when Andrew’s youngest brother, Tyler, is arrested for murder. Rounding out the family members are Henry, an internal affairs detective, and Molly, Tyler’s twin sister and a decorated army veteran.

The two characters who would see the most screen time are Andrew and Henry. For Andrew, I see Gregory Peck in his To Kill A Mockingbird days (though perhaps a few years younger). Andrew is a former prosecutor and current governor of Vermont, who has built his entire career on a platform of honesty and integrity. His reputation means more to him than anything…except maybe his family. When the arrest of his intellectually-challenged brother Tyler tests the strength of his ethics and morals, Andrew is forced to confront what he will do and how far he will go to protect his family. In Mockingbird, Peck’s Atticus Finch gave us the ideal man of integrity, someone unwilling to compromise his ethics in the face of extreme pressure and vile prejudice. I see a lot of Atticus Finch in Andrew, and I have to wonder what Finch—as portrayed by Gregory Peck—would do in Andrew Kane’s shoes.

Henry, on the other hand, an internal affairs detective with the Vermont State Police, is generally an honest and upright man, but he has crossed the line in the past. An actor playing him would need to be able to be tough, sharp, but also sympathetic and believable in his more tender moments, as in when he is interacting with Tyler. Leonardo DiCaprio from The Departed could portray Henry well. A thirty-two-year-old Matt Damon (who was also in The Departed) could also nail this role.

Molly Kane is a decorated army veteran studying criminology in hopes of following Henry onto the state police force. She is strong and resourceful, but also kind and maternal to her twenty-nine-year-old twin brother Tyler, who suffered a tragic fall when they were both seven years old. She is the glue that holds the Kane family together. I see Jessica Chastain or Bryce Dallas Howard doing a wonderful job playing her role.

The final member of the Kane family is Tyler. He is twenty-nine years-old but a traumatic brain injury suffered in a fall twenty-two years ago has left him with the intellectual capacity of a seventh grader. He is sweet and innocent and commutes to his “job”—which is actually a volunteer position at an animal shelter—on an electric bicycle, which he calls his “motorcycle.” To play him, I would ask Leonardo DiCaprio to do double duty, handling the role of the older Henry, while also playing the younger Tyler. We all remember DiCaprio from his Oscar-nominated, virtuoso performance as Arnie, an autistic young man in What’s Eating Gilbert Grape? In A Blood Thing, Tyler’s condition is different from, and would be less dramatic in its portrayal than, that of DiCaprio’s character in Gilbert Grape, but DiCaprio clearly has the acting chops to give a moving, sensitive performance in bringing to life innocent Tyler, who is the heart of A Blood Thing.

Finally, I suppose we should talk about the book’s bad guy, the twisted blackmailer who murders a woman and pins the crime on Tyler, kicking off a complex plan to bring the entire Kane family to ruin. The villain is brilliant and obsessed and any number of actors could play him extraordinarily well, but I’m going to choose Joel Edgerton, a terrific actor who plays good guys and bad guys with equal skill, and who would bring intensity, intelligence, and menace to the role.

Directing the film, I would love to see Martin Scorsese (The Departed), Sydney Pollock (The Firm), or Sydney Lumet (The Verdict).