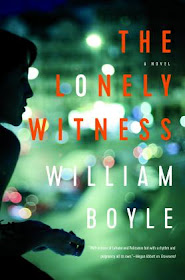 William Boyle is from Brooklyn, New York. His debut novel, Gravesend, was published as #1,000 in the Rivages/Noir collection in France, where it was nominated for the Grand Prix de Littérature Policière. Gravesend is currently shortlisted for the John Creasey (New Blood) Dagger in the UK and will be reissued by Pegasus Crime in the US in September 2018. Boyle is also the author of a book of short stories, Death Don’t Have No Mercy, and of another novel, Tout est Brisé (Everything is Broken). His most recent novel, The Lonely Witness, is out now from Pegasus Crime. A new novel, A Friend is a Gift You Give Yourself, is forthcoming in March 2019. He lives in Oxford, Mississippi.

Here Boyle dreamcasts adaptations of Gravesend and The Lonely Witness:

The Lonely Witness is a follow up to Gravesend, set almost seven years later but in the same neighborhood and with a couple of the same characters. If they make my books into films, here's who I'd like to play the lead roles. (I sometimes imagine actors into roles as I’m writing, though often faces shift and blend. For the purposes of this, I’ll just settle on dream casts.)