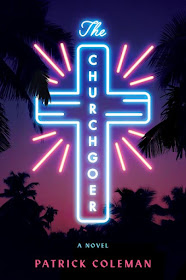 Patrick Coleman makes things from words, sounds, and occasional pictures. His debut collection of poems, Fire Season, was written after the birth of his first child by speaking aloud into a digital audio recorder on the long commute between the art museum where he worked and his home in a rural neighborhood that burned in the Witch Creek Fire of 2007. It won the 2015 Berkshire Prize and was released by Tupelo Press on December 1, 2018. His short-form prose has appeared in Hobart, ZYZZYVA, Zócalo Public Square, the Writer's Chronicle, the Black Warrior Review, Juked, and the Utne Reader, among others. The Art of Music, an exhibition catalogue on the relationship between visual arts and music that he edited and contributed to, was co-published by Yale University Press and the San Diego Museum of Art. Coleman earned an MFA from Indiana University and a BA from the University of California Irvine. He lives in Ramona, California, with his wife and two daughters, and is the Assistant Director of the Arthur C. Clarke Center for Human Imagination at UC San Diego.

Here Coleman dreamcasts an adaptation of his first novel, The Churchgoer:


I honestly hadn’t thought about until yesterday, when my wife and I started joking around about it in the car. I don’t “see” characters like that when I write. (Is that a strange thing to admit? I just read the amazing Janet Fitch’s response here and she certainly does, and if she does everyone should, right?) For Mark Haines, the ex-Evangelical pastor who tells the story and is the protagonist, you’d need someone 50-ish who clearly had been able to turn on that youth preacher-y charm at one time, but who’s flipped the switch and seen some rough times. Owen Wilson would be kind of perfect—that Texas-gone-Californian twang has been heard in many a megachurch sanctuary—or his brother Luke. Ethan Hawke—he played a priest once, close enough—or Ed Norton would do a good job with it. Maybe John Corbett taking a dark turn; that’d be fun to see. Or give it to Kirk Cameron—that’d be a turn!—or Jim Caviezel!