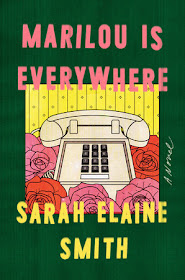 Sarah Elaine Smith was born and raised in Greene County, Pennsylvania. She has studied at the Michener Center for Writers, UT-Austin (MFA, poetry); the Iowa Writers' Workshop (MFA, fiction); and Carnegie Mellon University (BA, English and Creative Writing). She has worked as a metadata analyst (signed an NDA & shall say no more!), a college teacher, a proofreader/copyeditor, design consultant, waitress, and ghostwriter. Her work has received support from the MacDowell Colony, the Rona Jaffe Wallace Foundation, and the Keene Prize for Literature, among other generous entities.

Here Smith shares her vision for an adaptation of Marilou Is Everywhere, her first novel:


The movie is called Marilou Is Everywhere: This Ain't No Winter's Bone. When people see the trailer, they go, "Isn't this kind of like Winter's Bone? and that gravely voiceover guy from all the movie trailers says NO. Jennifer Lawrence stands outside the theater holding a sign that says "I AM Jennifer Lawrence and I am NOT in this movie." Cindy is played by an unknown but brilliant young actor with a face that seems to move in and out of shadow when she smiles. Jude is played by Storm Reid. Anjelica Huston plays Bernadette. Virgil and Clinton are played by a real-life pair of brothers who were fixing an HVAC system in the studio the day of casting. Everything is shot in Greene County, PA, and West-by-God-Virginia. "Heat Wave" by Snail Mail plays over the opening credits and "Touch 'Em With Love" by Bobbie Gentry plays over the closing. It's one of those movies where there's all these static shots of: a dripping faucet, a huge black snake crossing a two-lane road and disappearing into the grass like a melting shadow, Clinton wiping a smudge of dirt on Cindy's forehead and laughing, the sumac bushes at the edge of the forest shuddering in the wind, as if something huge had just passed through, Cindy tracing words in the dust on the tailgates of trucks parked in front of Pecjack's gas station: LUCK, SNAKE, LOOSIFER. Emotional states are conveyed by how long the characters stare at things like flies bumping against the windows. Everyone who goes to the movie on their first date falls in love.

The Page 69 Test: Marilou Is Everywhere.