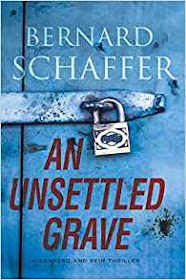 Bernard Schaffer is an author, full-time police detective, and father of two. As a twenty-year veteran police officer, he’s a court recognized narcotics expert, a graduate of the prestigious Top Gun Undercover Law Enforcement Training Program, child forensic interviewer, and possesses a Class A certification in the use of wiretaps. A child actor, Schaffer appeared in multiple television commercials, performances at the Walnut Street Theater (where his picture still hangs in one of the upper, darker corners), Saturday Night Live, and the Nickelodeon series Don’t Just Sit There. Schaffer is the author of multiple independently-published books and series, including Superbia, Grendel Unit, Guns of Seneca 6, and more. A die-hard supporter of the Philadelphia Union, he is proud to say that he’s never been ejected from a game. Yet.

Here Schaffer dreamcasts an adaptation of his new novel, An Unsettled Grave:


You know, the movie question comes up a lot and I never really have a good answer for it. I love cinema. Everything from black and white foreign films to the MCU. But for me, books are a different thing.

I like the old school New York method actors best, so give me one of them. Marlon Brando, Mickey Rourke, guys like that.

For Carrie, the female lead of the Santero and Rein Thriller Series, I’d have to say a younger Jessica Chastain. Emma Stone might work. Someone who starts off in the first book as young and idealistic but committed to catching bad guys. She is smiling and hopeful. But then, over time, as she sinks deeper and deeper into the true horror of what human beings do to one another, you see that spark go out of her eyes and it’s replaced by something else. A darkness that never goes away.

As far as directors go, I’m fan of many. The thing is, the directors I like would take the source material and change it to suit their own vision. That’s okay, because the movie is its own thing, a different creature from the books entirely, but you need someone with a bright enough creative vision that if they’re going to monkey around with my story, it had better be monkeyed around with correctly. I’d trust Coppola or Scorsese or Tarantino with that all day. I’ve been a fan of the Russo Brothers since Community. I’ve been a fan of Cary Fukunaga since True Detective.

It can’t just be anyone though. I have friends who’ve sold the movie rights to their books to anyone who came along, just to say they did it. I haven’t had to cross that bridge yet, so who knows how well my morality holds up when they start waving dollar signs in front of me.

As for now, replace my dialogue with forty-five minutes of CGI explosions and we’re going to have a problem. I will come see you.